When the Going Gets Tough - Korg Single Styles 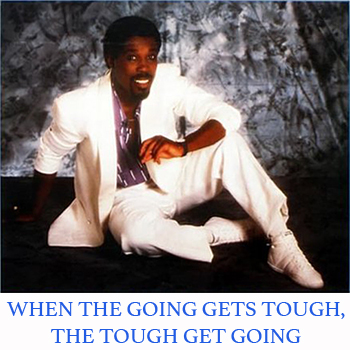 When the Going Gets Tough - Korg Single Styles

This song was co-written and originally recorded by English singer Billy Ocean in 1985 and was used as the theme song for the Michael Douglas film, The Jewel of the Nile (the sequel to the hit blockbuster film, Romancing the Stone). Sales were aided by a video featuring Douglas and co-stars Kathleen Turner and Danny DeVito as lip-synching backup singers, the song became a major international hit reaching number one on the UK Singles Chart for four weeks in February 1986. Boyband Boyzone recorded a cover version for the 1999 Comic Relief telethon, shortening the title to "When The Going Gets Tough". The version reached number 1 in the UK Singles Chart and received a platinum certification in the UK. The video included Graham Norton, Jo Brand, Phill Jupitus, Mel Smith, Davina McCall, Harry Hill, Steve Collins, John McCririck, Jimmy White, Mystic Meg, the cast of Emmerdale and Ulrika Jonsson and Saracen from Gladiators.

This is a one off single rhythm complete with intro's/endings/fills & variations written in the style of the song for Korg instruments. (Please note this is not a song file - often refered to as a midi file - that refers to and plays only one song. Subject to the chords you play on your instrument this style can be used for many numbers of which When the Going Gets Tough, the Tough Get Going is just one).

Dancing in the moonlight - Korg Single Styles
£5.00
Add to Cart

Laughter in the rain - Korg Single Styles
£5.00
Add to Cart