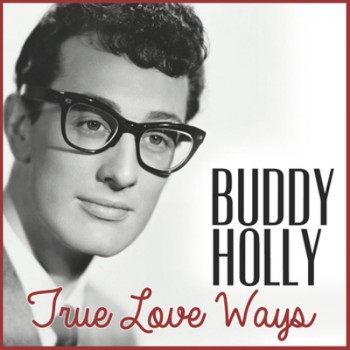 "True Love Ways" was written by Buddy Holly and Norman Petty and recorded with the Dick Jacobs Orchestra in October 1958, four months before the singer's death. It was first released on the posthumous album The Buddy Holly Story, Vol. 2 in March 1960. The song was a UK hit in 1960, reaching number 25 on the pop singles chart. In the extended version of the song, in the first ten seconds, Holly can be heard preparing to sing. The audio starts with audio saying "Yeah, we're rolling." A piano player and a tenor saxophone player play some notes, and Holly mutters, "Okay," and clears his throat. The producer yells, "Quiet, boys!" to everyone else in the room, and at the end of the talkback, the producer says, "Pitch, Ernie", to signal the piano player to give Holly his starting note, a B-flat.

Holly wrote "True Love Ways" for his wife, Maria Elena Holly, as a wedding gift. On April 29, 2011, she unveiled the never-before-seen "True Love Ways" photo of their wedding kiss where they became engaged while on their first date, on June 20, 1958.

This is a one-off single rhythm complete with intro's/endings/fills & variations written in the style of the song for Technics Keyboards (KN3000 and onwards - please see attributes tab) instruments. (Please note this is not a song file - often referred to as a midi file - that refers to and plays only one song. Subject to the chords you play on your instrument this style can be used for many numbers of which True Love Ways is just one).