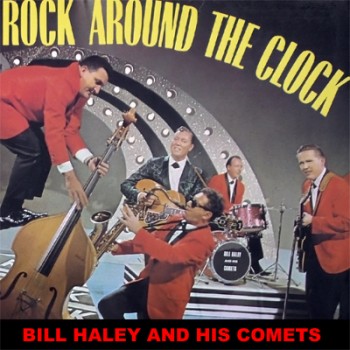 "Rock Around the Clock" was a rock and roll song in the 12-bar blues format written by Max C. Freedman and James E. Myers (the latter being under the pseudonym "Jimmy De Knight") in 1952. The best-known and most successful rendition was recorded by Bill Haley & His Comets in 1954. It was a No.1 single in both the USA &UK charts it also re-entered the UK Singles Chart in the 1960s and 1970s.

Haley's recording became an anthem for rebellious 1950s youth and is widely considered to be the song that, more than any other, brought rock and roll into mainstream culture around the world. The song is ranked No. 158 on the Rolling Stone magazine's list of The 500 Greatest Songs of All Time. Although first recorded by Sonny Dae and His Knights in March 1954, Myers claimed the song had been written specifically for Haley but, for various reasons, Haley was unable to record it himself until April 1954.

This is a one-off single rhythm complete with intro's/endings/fills & variations written in the style of the song for Technics Keyboards (KN3000 and onwards - please see attributes tab) instruments. (Please note this is not a song file - often referred to as a midi file - that refers to and plays only one song. Subject to the chords you play on your instrument this style can be used for many numbers of which Rock Around The Clock is just one).