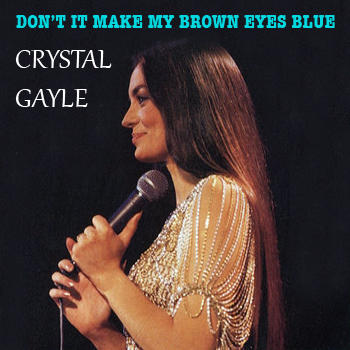 Written by Richard Leigh, released in March 1977 and recorded by American country music singer Crystal Gayle this was the first single from her album ‘We Must Believe in Magic’. Leigh had been responsible for all three of Crystal Gayle's previous Top Ten C&W hits. According to Gayle's regular producer Allen Reynolds, the song had been destined for Shirley Bassey but he had stepped in and claimed the track for Crystal. It was then recorded in Nashville in October 1976. As Reynolds' regular session keyboard player Charles Cochran had suffered a stroke with some resultant numbness in his hands, Reynolds hired Hargus "Pig" Robbins to play keyboards, and it was Robbins who devised the song's signature acoustic piano riff.

In a 2004 Country Music Television interview, Gayle stated that Leigh wrote the song because his dog had one brown eye and one blue eye.

This is a one-off single rhythm complete with intro's/endings/fills & variations written in the style of the song for older Ketron instruments. (Please note this is not a song file - often referred to as a midi file - that refers to and plays only one song. Subject to the chords you play on your instrument this style can be used for many numbers of which Don't It Make My Brown Eyes Blue is just one).